Guitars are not limited to only six strings. There are even twelve-string acoustic guitars, which offer characteristically lush harmonics. Well-suited for American folk music such as country and bluegrass, playing these instruments creates a gentle atmosphere.

The benefit of a double neck guitar (which looks like two guitars stuck together) is that it allows the player to switch instruments when there is no time to actually strap on another guitar-even in the middle of a song! A variety of double neck guitars have been manufactured to meet the needs of guitarists, such as instruments that combine electric and bass guitars, nylon-stringed classical guitars and steel-stringed acoustic guitars, and even guitars and mandolins.

The appeal of electric acoustic guitars 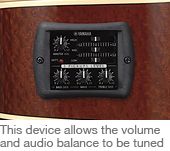 Electric acoustic guitars harness electric power for those times when you want a lot of people to hear your playing loud and clear. Vibrations from the strings are converted to electric signals by a condenser microphone or piezoelectric pickup, then the sound is amplified by a device (amplifier) the guitar is plugged into.

It can also be played as a regular guitar-no power required! A condenser microphone is capable of clearly picking up even high-pitched sounds. The microphone is set on the guitar in such a way that it picks the sound up from within the body, so it is easy for howling to occur.

A piezoelectric pickup is a device that converts the vibrations of the instrument itself into electrical signals. It resembles a thin sheet of film. These pickups are often placed below the saddle. Although they are structured to prevent howling, they produce a sharp and slightly quirky sound compared to the sound generated by a microphone. Yamaha offers several options designed to produce better sound, such as piezoelectric pickups integrated into the saddle that produce a sound with a nuanced tone that is closer to the original sound of the guitar, and devices that include mechanisms to control the sound produced in environments such as the studio. 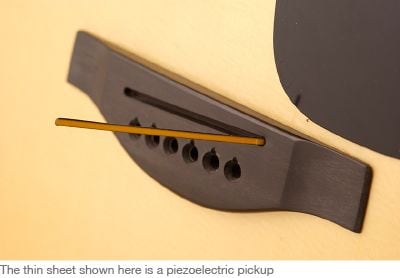 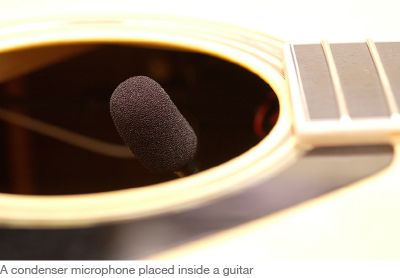 There are even guitars especially for left-handed players! 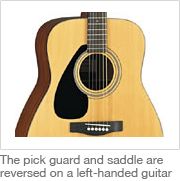 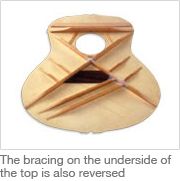 Guitars are made to be played with the left hand pressing and the right hand plucking or stroking the strings. However, this is definitely more comfortable for right-handed players.

There are some left-handed players who play on normal guitars-they simply wear the instrument "upside-down." Such players need to learn to press the strings in reverse order. While this is certainly impressive, there are actually guitars designed for left-handed players. The first difference is that the position of the pick guard reversed. The orientation of the saddle that supports the strings is also reversed. The bracing inside the body is reversed so that sound resonates well.