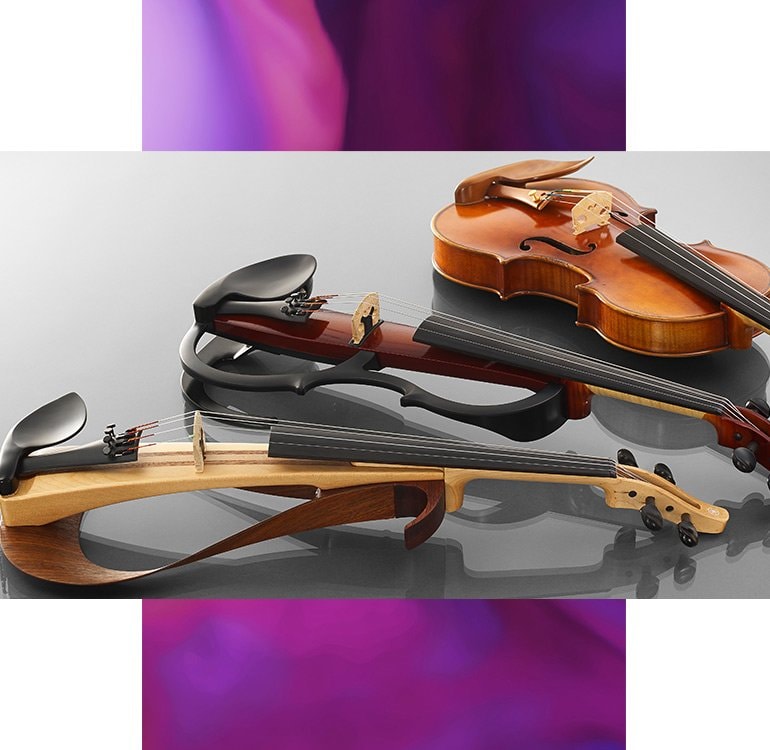 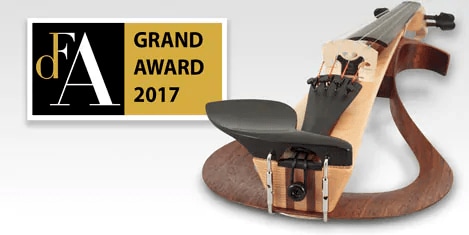 A revolutionary violin that's both aggressive and expressive.

Getting Started with Strings: Violin, Viola, Cello, and Bass

The string family is comprised of the violin, viola, cello, and bass. These instruments all share a few common characteristics. Every instrument in the string family, in general, has four strings that are tuned in fifths and made from nylon, steel, or sometimes gut. The strings are most commonly played by dragging a bow across them. The hair on the bow is made from the hair of horses’ tails. The player may also play the strings by plucking them in a technique known as pizzicato. The left hand holds the neck of the instrument and presses the strings against the fingerboard in order to change the pitch, while the right hand is used to bow the instrument. All classical string instruments are made from wood and have a hollow body to allow the sound to resonate inside of them. String instruments are an integral part of the orchestra and play more than any other instrument group.

The string family is an incredibly versatile family of instruments with a member of the family to cover every range. While some of the some string instruments, such as violin and cello, have a much larger and more famous repertoire, every string instrument can sound great as solo instrument or in an ensemble.

Violin is probably the most recognizable of the string family. It is the smallest of the string instruments and also the highest pitched. Violins are comfortable playing either melody or accompaniment, and either solo or in ensembles of any size. Music for violin is written in the treble clef, which is probably the most recognizable of all clefs. There are countless famous pieces of music, from violin concertos to sonatas to solo works, that have been written for violin. There are more violins in an orchestra than any other instrument. Orchestras will have up to 30 violins and they will be divided into two sections. The first violins will typically play melody while the second violins will play harmony. Violins are played with the violin resting between the player’s left shoulder and chin. Many violins are modeled after the violins made by Stradivarius, who was the most famous violin-maker of all time, and whose violins sell for millions of US Dollars.

Viola looks a lot like a larger violin, and it does share many of the characteristics of the violin. Viola is the second smallest instrument in the string family and its strings are tuned a perfect fifth below the strings of a violin. Violas are much less frequently played as solo instruments and in ensembles they mostly play the accompaniment. Music for the viola is written in the alto clef, which is much less common than the treble and bass clefs. When compared to the violin, the repertoire for viola is considerably smaller, Many violinists can also play viola and will do so in order to get more gigs. There can be up to 14 violas in an orchestra and they mostly play inner harmonies. Like violins, violas are played by holding the instrument between the player’s left shoulder and chin.

Cello, also known as violoncello, is bigger than violin and viola. The strings on a cello are tuned an octave below the strings of a viola. Cello is thought to be the instrument that, out of all the string instruments, sounds closest to the human voice. Cellos are comfortable playing both solo and in an ensemble. Music for the cello is written in the bass clef, which is a very common clef and only slightly less common than the treble clef. The cello enjoys a large repertoire of famous works in all of the classical genres, comparable to that of the violin. An orchestra contains one section of up to twelve cellos which play bass, harmony, and melody. Cellos are much too large to play in the same way as a violin, so it is played with the player sitting down and the body of the cello between the player’s knees. The body of the cello rests on the ground and is supported by a metal peg and the neck of the instrument rests on the player’s left shoulder.

Bass is perhaps the most visually striking of the string family. At over six feet in length, it is by far the biggest member of the string family. While all of the other members of the string family are tuned in fifths, the bass is tuned in fourths, with E being the lowest string. There are pieces in the orchestral repertoire that require the bass to play a C or B below E, so basses will either have a fifth string tuned to C or B, or a string extender which allows the E string to play a low C. The bass is almost always played in ensembles, although solo works do exist for it. When played as a solo instrument the bass needs to project more and so it uses a set of strings designed for solo performance, and is tuned a whole step up, so that F# is the lowest note. The bass sometimes takes the place of the bass guitar in jazz, folk, and certain kinds of rock music. Music for the bass is written using the bass clef, but sounds one octave lower than it is written, meaning that the bass is a transposing instrument. There are up to eight basses in an orchestra and they almost always play harmony. In much of the orchestral repertoire the main job of the bass is to double the cello in order to provide more resonance to the overall sound of the orchestra. However, beginning in the romantic era, composers began to write more independent bass parts. A bass is so tall that a bass player must stand up or sit on a tall stool in order to play the instrument. Like the cello, the body of the bass rests on the ground and is supported by a metal peg, while the neck of the instrument rests on the left shoulder of the player.

Although it is unlikely that you will see them in any orchestra, each member of the string family has an electric counterpart. You may have seen a rock concert that featured an electric violin, or maybe you have seen 2CELLOS rocking out on two Yamaha Silent Cellos. These instruments take the traditional roles of the string family and allow them to be used with amplifiers and effects. The Silent Series takes this a step further and allows the player to practice silently when they need to be quiet and then plug into an amplifier when it is time to rock.