Smart Morph is a new feature for morphing FM-X sounds. 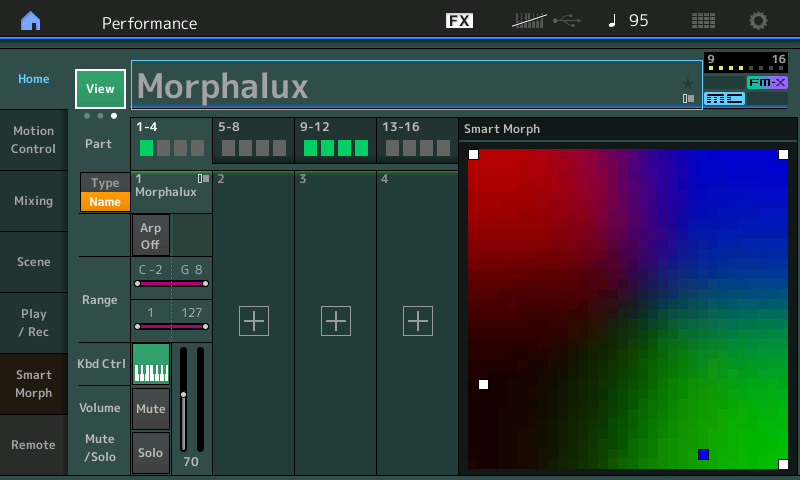 A sophisticated A.I. algorithm “learns” FM-X sounds assigned to Parts 9 to 16 and plots each sound as a point on a visual control map.FM parameters are assigned to three color coded points designated as “Red”, “Green” and “Blue” and then touching “Learn”. The algorithm then creates interpolated FM-X sounds from Parts 9-16 and the results of the Smart Morph appear in Part 1.

Points are able to be directly drawn on the touchscreen within the new Smart Morph control map. Assigning motion between any two points to control with the Super Knob for expressive morphing the FM-X sound is also possible. Smart Morph is a powerful tool for creating new FM-X sounds.

MODX has been able to load MONTAGE User (.X7U) and Library (.X7L) files. Now with MONTAGE OS v3.5, MONTAGE can now load MODX User (.X8U) and Library (.X8L) files. Leave MONTAGE in the studio, take MODX on the road (or visa versa), and be reissured that MONTAGE and MODX can now freely exchange User and Library files with ease.

MONTAGE and MODX have always been control-friendly and each OS update adds more control possibilities.

Foot Switch assignments are globally set under [UTILITY]/Settings/MIDI I/O. Here, MIDI control numbers and hardware-specific controls can be assigned: Arp Switch On/Off, MS (Motion Sequence) Switch On/, Sequencer Play/Stop, Live Set +, Live Set – and Octave Reset. With MONTAGE OS v3.5, Tap Tempo is added. This is a nice feature for live performance - making it easy to control the tempo of the Pattern Sequencer or set a tempo delay effect to sync with a live band, all hands-free.

Add Parts during Record or Playback: Select instruments while recording for uninterrupted creativity.

Overdub Controllers: MONTAGE OS v3.5 adds real-time overdubbing to record your Controller actions while deleting previous Controller events. This is especially useful for adding or replacing Super Knob movements into the Pattern. Don’t like the Super Knob motion you recorded into the track? Just overdub a new one. It’s just that simple.

Normalize PlayFX by Scene: PlayFX let you customize the feel of a track. Once you get a feel you like, you can write those changes (Normalize) directly to the track. Before MONTAGE OS v3.5, Normalize applied to all Scenes in a Pattern. Now you can Normalize Play FX on a Scene-by-Scene basis. This is great for comparing or evolving grooves as part of a composition or performance.

Undo on all Screens: “Undo” is available on the main screen, Overview screen and on all the Pattern Edit/Job screens. This greatly improves workflow.

Get Phrase All: Get Phrase Job lets you move sections of a MIDI file into a Pattern Track. MONTAGE OS v3.5 adds the ability to get ALL tracks in addition to individual tracks.

There are some nice [UTILITY]/Settings UI enhancements that speed up workflow:

Audio I/O: Same functionality as listed above in Quick Setup for both USB Volume and Monitor Volume Main and Assign.

MIDI I/O: Same Functionality as listed above in Quick Setup for Local Control.