The secret story of the YSP series development. 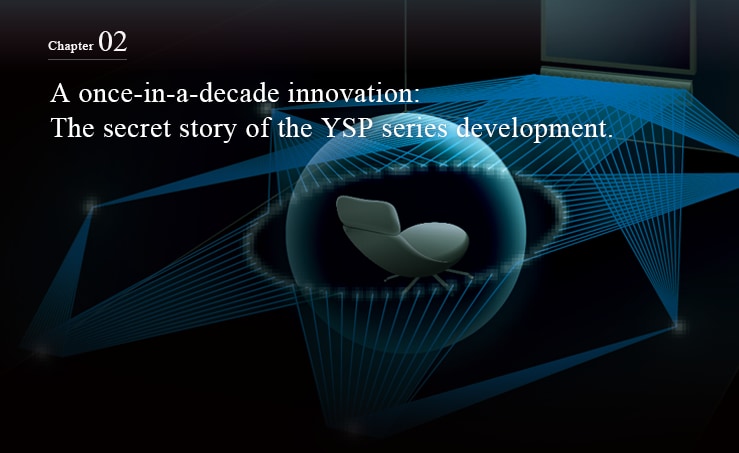 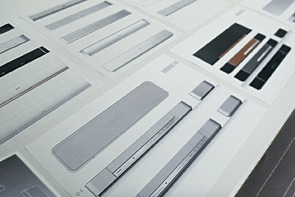 With the spread of DVDs recorded in 5.1ch surround sound, the mid-1990s saw an upsurge in the home theater market. But at the same time building a home theater required the installation of numerous speakers and the annoyance of extensive wiring. Yamaha said, “Let’s see whether we can develop a system than can produce surround sound using only front speakers,” and began a research project aimed at achieving this goal. After 2000, when flat-screen TVs became popular, their very thinness meant that YSP units had to be slimmer. Speakers typically produce sound using resonance within the housing in which they are encased. Just making the speakers thinner means sufficient resonance cannot be obtained, resulting in decreased volume and sound quality. In autumn of 2001, Yamaha came up with the solution of using a large number of small speakers to preserve volume while meeting the constraints of a thinner unit body.

Getting familiar with the basic technology
behind turning sound into a beam.

Once the basic direction of using a group of small speakers was set Yamaha researchers worked hard to make it a reality, but day after day the desired results remained out of reach. Then at the beginning of 2002 the British company One Ltd (now Cambridge Mechatronics Ltd) introduced some very interesting new technology. With multiple small-diameter speakers arranged in an array, sound could be directionally aimed by shifting the timing control of each speaker. The resulting sound beam could be reflected off a wall and directed toward viewers to produce a surround sound system. This was the basis of Digital Sound Projector technology.

To speed up development Yamaha signed a partnership with One Ltd to bring this innovative concept into the marketplace, putting together a team of experts to handle the project. Like the model they had seen at One Ltd, their initial prototype was loaded with 254 speakers. When all were connected to an amplifier it was a surprisingly large piece of equipment, so couldn't be turned into an actual product. A lthough at this point it was only at the level of L-R two-channel sound, development team members felt sure that the project could succeed. They played Holly Cole, and when they were right in front of the prototype they noticed that sound also came from the left wall behind them. It was such a distinctive sound that it is still surprising now that it had such a feature. It was an exciting once-in-a-decade innovation. 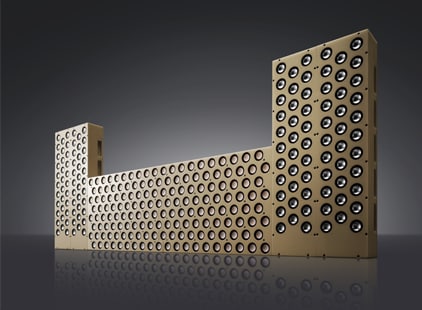 A relentless commitment to sound and
style suited to the living room. 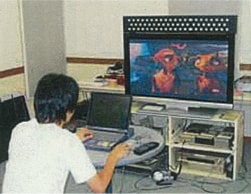 With the goal of producing a unit ideal for use with flat-screen TVs, the number of speakers to be installed, their caliber and placement were all subjected to multiple rounds of simulation, prototyping and test listening. While this was happening, the news suddenly broke that a rival company had released a surround sound system using One Ltd technology. But with a large unit housing and expensive price tag that system was very different from what Yamaha was aiming for. Sticking to the principles that the unit housing must be thin and that, “If it’s a Yamaha, it can never compromise on sound,” the development team took the position that surround sound should emphasize the lateral spread of sound and that there was no need for vertically-oriented speakers. For the prototype’s final specifications they settled on a three-row array of speakers with woofers on both sides. This was the original YSP-1. 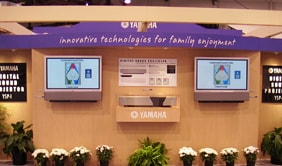 In January 2004, the prototype with three rows of speakers was finished. It was unveiled for the first time at the biggest electronics show in the United States, CES 2004 (Consumer Electronics Show), where it attracted tremendous attention from the show’s attendees. “Surround sound you hear from a wall!”, they gasped at the completely new audio experience. Following the show Yamaha initiated a project with the specific goal of mass-producing the unit for a planned commercial launch in December of that year. To confirm that the system could produce its surround sound effects in the home viewing environment and not just in the controlled environment of the laboratory, the prototype was taken to each development team member’s home for testing, with the pace of work accelerated to a feverish pitch.

Then, with a June deadline for ordering the molds to produce the unit’s metal frames looming, some problems with the unit’s basic structure that could interfere with sound quality improvement were identified. Essentially, because the unit’s casing was not sealed airtight, sound quality might be diminished by air escaping from the unit. With production set to start in October it was very bad timing, but development team members remained committed to a single principle: “We want to make something that sounds good.” They made the decision to change the design. To improve its airtight sealing they introduced a single iron plate into the housing. Overcoming this and other challenges, the final prototype for the YSP-1 were finished in mid-September, just half a month before the scheduled start of mass production. They confirmed that they had achieved all the targeted specs. Forever altering the course of home theaters to come, the YSP was born. 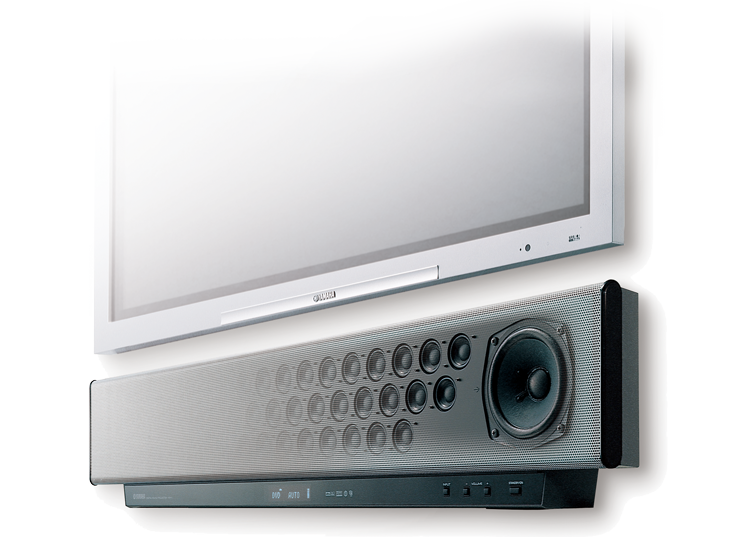