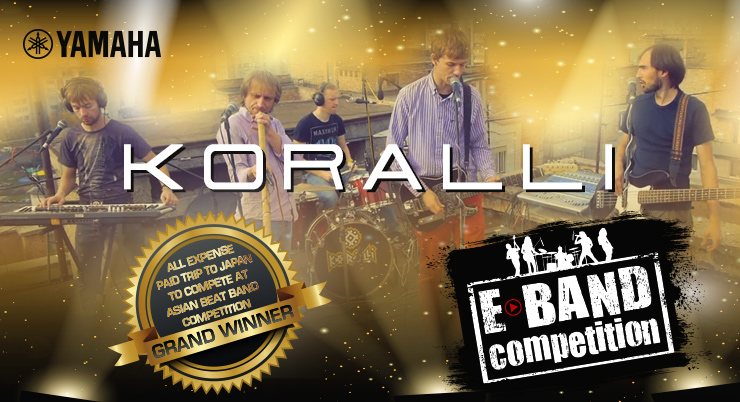 We are pleased to announce the Grand Winner for the Yamaha E-Band Competition 2016.

Congratulations to KORALLI Band from Ukraine!

The band will be granted an all-expense paid trip in Tokyo, Japan and compete with other grand finalists at the

Announcing also are the Individual Winners who will also receive corresponding prizes of Yamaha products.

We would also like to express our many thanks to all of the bands who sent their video entries.

He is a creative director, composer, arranger, and keyboardist with a storied career in the field of software production, music production, and music education. As a sound designer he has created sounds for many Yamaha synthesizers such as the DX, SY, QY, VL, EX, CS, MOTIF and MONTAGE series. In addition to creating hundreds of songs for television commercials and instrument demos. He has provided demonstrations, performances and training in several countries across Eurasia. He has also appeared in over 350 video reviews of digital products, which have gained more than 16 million views on YouTube and attention from musicians and creators around the world.www.youtube.com/user/musictrackjp

He is a professional drummer based in Japan. His 25 plus years in the music industry have taken him to over 40 countries. His professional career began as an orchestral percussionist and evolved to marching specialist and a masterful drum set artist, who embraces all genres of music. He has a particular affinity for all forms of Jazz, Breakbeats, EDM, D&B, Progressive metal, Blues, R&B, Soul, Funk, Fusion, World, and Latin music. Zak had been an integral component in dozens of productions as a performer and composer. He shares his passion for music and drumming by educating the next generation of musicians at the accredited Tokyo School of Music.

We are pleased to answer all your inquiries regarding Yamaha E-band Competition, please use this form to contact us.