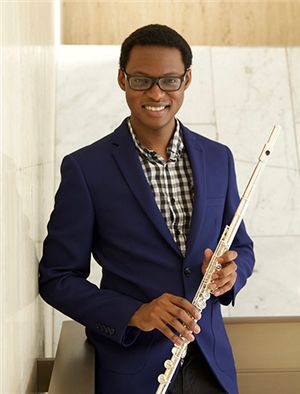 Sakhile began playing the flute at the age of 9, initially studied with Lisa Thom. He continued his studies at the South African College of Music (UCT) with Liesl Stoltz. He has appeared as principal flute and principal piccolo with the South African National Youth Orchestra, the Stellenbosch International Chamber Music Festival Symphony Orchestra and the UCT Symphony Orchestra. Sakhile has been a soloist with the KZN and Cape Town Philharmonic orchestras in South Africa.

In both South Africa and abroad, Sakhile has had masterclasses with Sir James Galway, Pierre-Yves Artaud Hansgeorg Schmeiser (University of Performing Arts, Vienna) and with Andrea Lieberknecht at the Summer School of the University of Music and Theatre in Munich.